The third lecture in the online lecture series Speaking From the Margins. DBBE Online Lectures, Spring 2022 Series will be given by Luise Marion Frenkel (University of São Paulo).

Luise Marion Frenkel has been assistant professor of classical Greek language and literature at the University of São Paulo since 2013. She holds one PhD in Mathematics from this university and one in Divinity from the University of Cambridge. She has been a visiting fellow of the British School at Rome and of ITSEE (Institute for Textual Scholarship and Electronic Editing) at the University of Birmingham. She has collaborated with a number of research groups, such as ‘Religious Individualisation in Historical Perspective’ in Erfurt, ‘Migration and Mobility in Late Antiquity and the Early Middle Ages’ in Tübingen and ‘Polyphony of Late Antique Christianity’ in Frankfurt. She has been a visiting scholar at St Edmund’s College, Cambridge. Her interests centre on orality, entextualisation and the transmission and reception of ancient texts. Most of her publications address the historiography of fourth- to seventh-century religious controversies in the Eastern Roman Empire and beyond.

Manuscripts of most fourth- and fifth-century Christian leaders, thinkers, rhetors, historians and poets have remarkably empty margins, and DBBE suggests that canonical authors and their works were not a favourite subject for poets. Still, a number of book epigrams, often added by later hands, can be found. Surveying the book epigrams which can be linked to Origen, Eusebios of Caesarea, Athanasius of Alexandria, Cyril of Alexandria and Theodoret of Cyrrhus currently in DBBE, some tentative conclusions will be drawn about the relevance of text-related poems on Byzantine readers and audiences. Then, some occurrences found in Paris. gr 451, Florence Plut. 70, 7 and Basiliensis gr. A III 4 will be discussed, pointing to new avenues for DBBE and all interested in the transmission and Byzantine reception of patristic authors.

No registration required. The lecture is freely accessible via Zoom: https://ugent-be.zoom.us/j/99015767396?pwd=S3dUQWdlNmJudWhNanRiUitNakxKZz09.

N.B.: A Zoom account is required to join this meeting. Please make sure to be logged in, using your Zoom credentials. 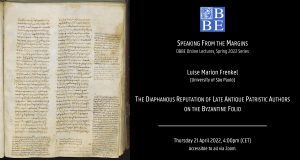