On this day in 323 BCE, Alexander the Great died. The Alexander Romance, a fictional account of Alexander’s life fashioned around a historical core, was very popular during the medieval period, as attested by the many versions in Greek, Latin, Syriac, Arabic, Persian, English, French, German and so on. In its Greek version, the tale has been preserved in eighteen manuscripts. One of them is manuscript Venice, Istituto Ellenico di Studi Bizantini e Postbizantini cod. 5 (14th c.), a luxury edition of the text, adorned with more than 200 richly executed illustrations.
The book opens with this portrait of the emperor for whom the manuscript was made, i.e. one of the emperors of the Trebizond as the title above the picture indicates, and most likely Alexios III. In the epigram written in red ink to the right of the miniature, the emperor addresses Alexander the Great: 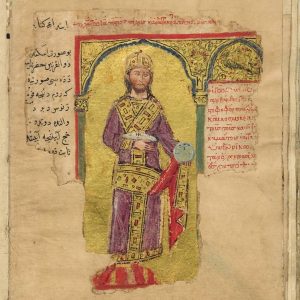 📖 I, O brave emperor Alexander, most excellent of all crowned men and ruler of all the world, having contemplated your great labors and [deeds], and your all-triumphant kingship, I had the desire …

Unfortunately, only part of the poem has been preserved. Also note the Turkish caption on the left, which was added by a later owner of the manuscript. This miniature possibly faced a now missing portrait of Alexander the Great on the opposite folio, which may have been accompanied by an inscription in which he replies to the emperor.