This morning, children in Belgium found treats and presents in the shoes they put in front of the fireplace last night. 🍭🎁 It’s Sinterklaas who paid them a visit! He is a legendary figure in the Low Countries based on Saint Nicholas of Myra, whose name day we celebrate today. Such a famous saint is hardly an unexpected subject of Byzantine book epigrams. 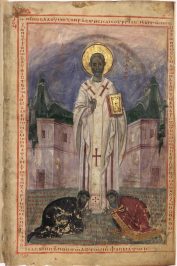 One of these poems accompanies this beautiful illumination in Vat. Reg. gr. 1 (10th c., f. 3r), the so-called ‘Bible of Leo’, ordered by Leon Sakellarios, who donated it to a monastery of Saint Nicholas, founded by his own brother Konstantinos. ⛪️ The miniature depicts Saint Nicholas blessing two men in proskynesis at his feet: Makar, the abbot of the monastery, on the left and Konstantinos on the right.
The epigram, written around the miniature, is a prayer from Leon to Saint Nicholas on behalf of both supplicants. Note the pun on the saint’s name in the first two words!

📖 [You who are] the victory of the people over wretched wrong-doing and evil spirits, grant O blessed one, to the [superior?] of your monastery to speed in wondrous fashion to the abodes of life, and likewise to its founder, as you dispense your grace to both – strength to the one, and to the other remission of his debts over here.

Go to our manuscript record and check out the other amazing epigrams and miniatures in this famous codex! Or read some other epigrams related to Saint Nicholas.