This poet, who was active in the 5th century BCE, was still popular in Byzantine times, as the following book epigram shows. The poem praises Pindar for the musical gift with which he artfully composed his odes, hymns and other kinds of songs. It opens with a comparison to show how much Pindar surpasses all others and then refers to an anecdote we also read in ancient biographies on the poet. It tells the story of how a bee once landed on the poet’s lips, after he had fallen asleep on Mount Helicon, and made a honeycomb. That would be the reason why Pindar became a poet of honey-like verses. 🍯 The last two verses bring up another mythological story that ancients have written about Pindar. They said that the satyr god Pan was once heard singing a song of Pindar. What more praise could a mortal poet hope for? 🎼 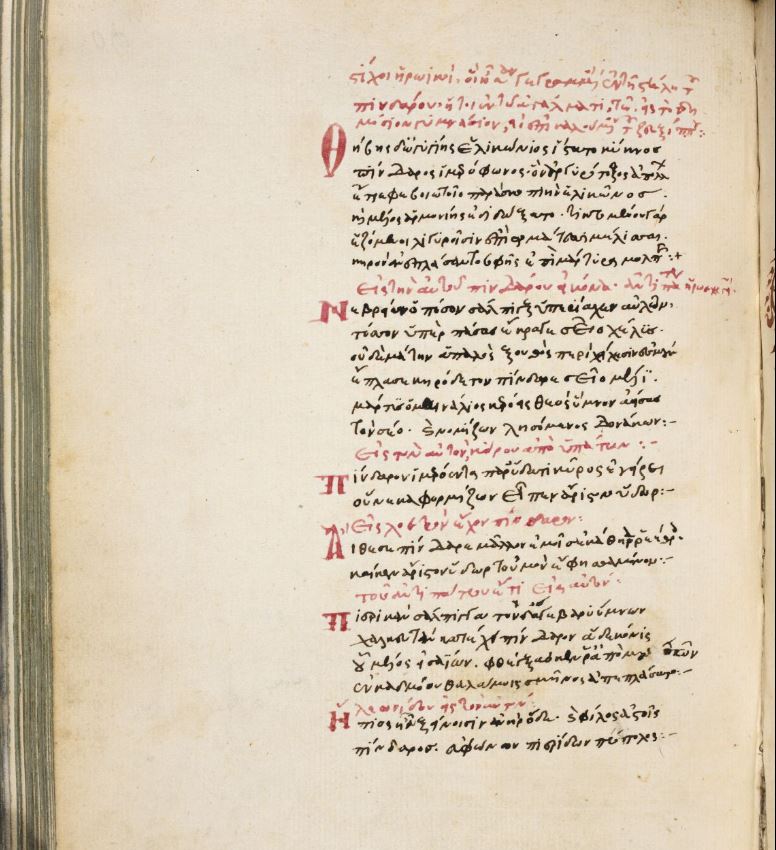 📖 As much as the trumpet out-peals the fawn-bone flute,
so much does thy lyre out-ring all others.
It was not idly, Pindar, that that swarm of bees
fashioned the honeycomb about thy tender lips.
I call to witness the horned god of Arcady,
who chanted one of thy hymns and forgot his reed-pipe.

This epigram is the second of a small collection of similar epigrams. These laudatory epigrams on Pindar are found in the Anthologia Graeca (16.305 etc.) and composed by Antipatros of Thessaloniki. Antipatros was a poet in the 1st century BCE. Therefore the archaic Greek and metre of his poems were nothing like the Byzantine language. In this 15th-century London, Harley 1752 (https://www.dbbe.ugent.be/manuscripts/14999), they precede the text of his Olympian Odes but were written by a different hand than the main text. It is not uncommon that several book epigrams were collected on a separate folio like this one. This shows that Byzantine readers also read and appreciated the epigrams independently from the text, as e.g. DBBEing Sien De Groot writes in her doctoral thesis.